It was JJs first show and tell at school, and their homework was to make a Leprechaun Trap. At first I have no idea what to do, so I searched online and was surprised that theres a lot of searches about this homework. I just made it simple for my kindergartner, so he can present it easy to the class, so we decided to used a shoe box since we got lots of those in the closets, and then went to AC Moore Arts and Crafts and bought some supplies, namely
shamrock stickers, glitter glues, gold tissue paper, and chocolate candy coins.
As soon as we got home, we put it together. I helped him out wrapping the box with the gold tissue paper and then I let him design it afterward.
He did pretty good for a 6yr old kid. Below is his Leprechaun Trap. 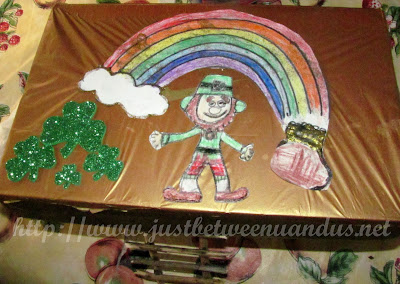 he sticks the shamrocks all over the box. draw his leprechaun, and a rainbow with a pot of gold at the end of it; cut it and pasted it on the top of the box. 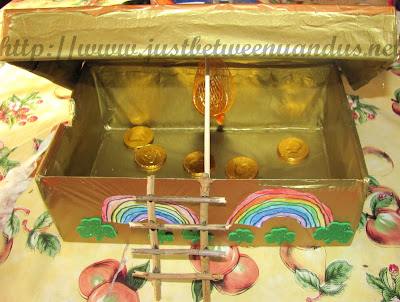 The top picture shows the inside of the box. As u can see there are gold coins inside and there’s one coin hanging on the stick, If the leprechaun reach for it, the stick will fall and the lid will close, then he’ll be trap in the box. =) its not something original but hey.. it was fun making it. lol. The only hard part is.. keeping the little guy hands off the coins, he know those are candies. hehehe 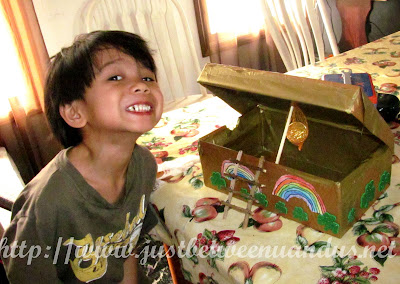 And heres my very proud boy, showing off his Leprechaun Trap.

oh i forgot to mention, we were up early today to get some sticks outside for the ladder. Jian said, leprechauns like to climb so he made him a ladder. =)

2 thoughts on “His first Leprechaun Trap”